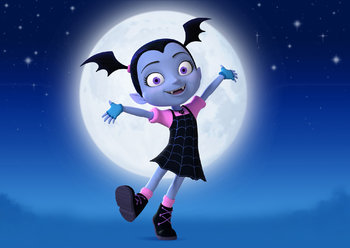 Whoa-oa-oa, Vampirina!
We were normal vampires in Transylvania
Like the other monsters on every block
'Til we packed our things and we flapped our wings
And we got a case of human race culture shock!
— The show's Expository Theme Tune
Advertisement:

Vampirina is a Disney Junior show based on the Vampirina Ballerina children's books (the name is shortened to just Vampirina for obvious reasons) which premiered on October 1, 2017.

Developed by Doc McStuffins creator Chris Nee, the show is about a young vampire girl named Vampirina Hauntley (nicknamed Vee) as she and her family move from Transylvania to Pennsylvania to open a bed and breakfast for visiting ghouls and goblins. Along the way, Vee navigates her way through the human world with help from her family and friends, all while keeping her monster identity a secret while trying to fit in with human culture.

The series eventually ended after its third season on June 28, 2021.