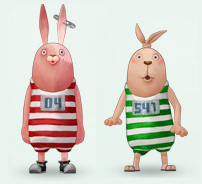 Usavich (from Usagi, Japanese for rabbit, and -vich, which is faux Russian) is a short CG-animated comedy that airs on MTV Japan. Briefly, Usavich is about two anthropomorphic rabbit fugitives. The first is Putin, a carefree and happy-go-lucky rabbit who always follows orders, dances a lot, is very skilled with repairing things, and panics quite often. The second is Kirenenko, an apathetic and ultra-strong rabbit who cares only about reading his shoe catalog or cleaning his shoes, and is oblivious to the fact that he lives in jail. Minor characters in the spare cast include Leningrad, a frog, and Comaneci, a strange hermaphroditic chicken... thing.

The first season focuses on prison life. The second season follows their adventures after escaping prison in a run-down car on a precarious mountain road. The third season deals with their stay at a high-rise skyscraper in the city. The fourth season observes Putin's attempts to perfect a robot duplicate of Kirenenko. In the fifth season they are trying to live in a forest while fending off attacks of a savage rabbit. The sixths season is a prequel ("Season Zero") about prison life when Kirenenko was still recovering from his wounds and before they became cellmates.

The comedy could best be described as adolescent. There's a bit of Toilet Humour, a lot of Slapstick (Kirenenko goes berserk quite often), and some surreal Black Comedy moments. Its lack of dialogue also makes it very accessible for a casual observer.