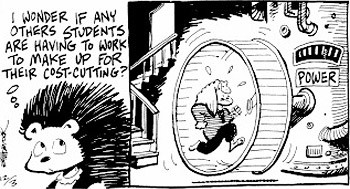 Della: Is... is that a hamster wheel?
Launchpad: Yeah! Well, obviously, a gerbil couldn't spin the propeller.
— DuckTales (2017), "The Golden Armory of Cornelius Coot!"
Advertisement:

One humorous way to demonstrate that a mechanical device is primitive, of amateurish construction, or simply underpowered is to have it propelled, not by internal combustion or electricity, but by Pocket Pet Power. Hook it up to a wheel-shaped or spherical cage, and let a small animal — usually a hamster or mouse — run its little legs off inside to generate torque. The larger the device, and the tinier the animal, the odder this arrangement looks.

More-plausible variants, which use large animals or human workers to turn their wheels, also appear in fiction. These aren't particularly funny and may be Played for Drama if the arduousness (and boredom) of walking inside a wheel for hours on end is emphasized. (See: Powered by a Forsaken Child.)

Other odd methods of powering a device by muscle action, such as pedaling or pushing levers, may also rate as variants of this trope, provided they're similarly Played for Laughs or melodrama.

A common power source for Homemade Inventions or Bamboo Technology. Often combined with Rube Goldberg Device for maximum wackiness. The Sister Trope of Wheel of Pain may also apply, if it's for a slave-driven variety of the serious version, or if being the power source is a form of torture or punishment.