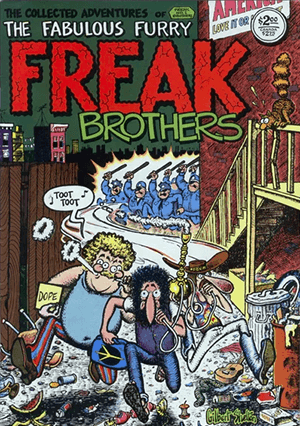 Classic indie comic series which ran from the late 60s to the early 90s. Written and drawn with exceptional talent by Gilbert Shelton, it followed the Gonzoid, gleefully profane adventures of the titular brothers- Fat Freddy Freekowski, Phineas Phreakers and Freewheelin' Franklin Freek.Invariably broke and struggling to avoid a hippy fate worse than death — having to work — these adventures were usually based around attempting to score a large amount of drugs without falling foul of Norbert the Nark and his dastardly government friends. Hilarity Ensues.

Read one way, it could be seen as a vicious dig at the decline of the alternative culture at the end of the 60s- it is made painfully clear that the brothers are aging, impulsive, ignorant and utterly amoral, invariably subscribing to counter-culture beliefs only as far as it will net them free pharmaceuticals. On the other hand, it is a mark of what a Crapsack World the Brothers inhabit that they themselves come across as harmless, lovable buffoons. The real targets of the comic are right-wing politics, surveillance-state invasiveness and the mundane, destructive hyper-consumerist culture the Brothers' slapstick existence runs completely at odds to.