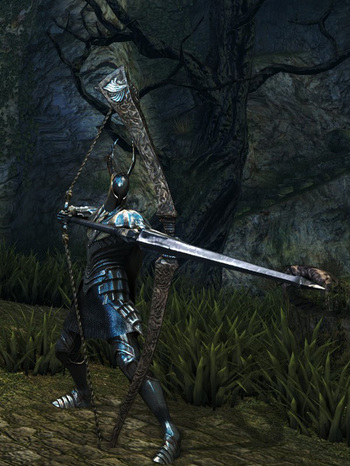 Whoever wields them is a great person too.note Also seriously, that "arrow" is so big and great that you could just use it as a weapon in of itself.
"Ahh, this Greatbow? I shan't need it, with no dragons to hunt. I know not if a human could even operate it, but here, thy need outweighs mine."
— Hawkeye Gough, Dark Souls I
Advertisement:

When you take Bigger Is Better for bows, you get the Great Bow, a type of bows so large that it almost towers over the wielder. It often requires an Anchored Attack Stance to be used, and is capable of firing abnormally huge projectiles designed for shooting down large beasts or opening a hole on a wall.

Generally speaking, these type of bows can fire more powerful projectiles than ordinary bows, and using them against humanoid targets is often comparable to firing a ballista bolt toward a person. Whoever gets hit by the huge arrows would get knocked flying, or be reduced to a pile of mincemeat, if not get killed in one hit.

Due to their immense size, sometimes they can be used as melee weapons.

Compare BFG for big guns and BFS for big swords. Not to confuse with bows that merely look great. Although it can overlap depending on how big said bow is.

In order to be qualified as this trope, the bow has to be as tall as the wielder, and it has to be a portable weapon. Stationary ballistae not carried by anyone don't count as this trope, that belongs to Siege Engines. However, if a character wields a ballista as a handheld weapon, it still counts as this trope, although will definitely need some Super Strength or have to be some sort of giant.

If Daniel finds enough chalices, RavenHooves the Archer will loan him his fabled bow for his quest.

If Daniel finds enough chalices, RavenHooves the Archer will loan him his fabled bow for his quest.