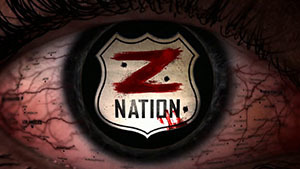 Have mercy! Oh, have mercy...
Advertisement:

Z Nation is a series about the Zombie Apocalypse which premiered on Syfy on September 12th, 2014 and finished after 5 seasons in 2018. It opens with the American soldier Lt. Hammond setting out to escort a prisoner named Murphy to California from the East Coast of the United States. Murphy was injected with an experimental vaccine to the zombie virus and is now the only source left of said vaccine.

Hammond and Murphy meet up with a group of survivors and enlist their aid in getting to California, where (supposedly) there still exists a laboratory able to replicate the vaccine using Murphy's blood. Meanwhile, a lone man using the handle "Citizen Z" offers what help he can to them and other survivors, beaming his radio broadcasts from an isolated arctic facility. Oh, and did we mention that this was made by The Asylum, of all companies?

This series can basically be described as a somewhat Lighter and Softer take on The Walking Dead in terms of post-apocalyptic television shows with zombies where the stakes for the surviving humans keep getting higher and a slightly Darker and Edgier take on Zombieland in terms of overall tone.

This show has the following tropes: