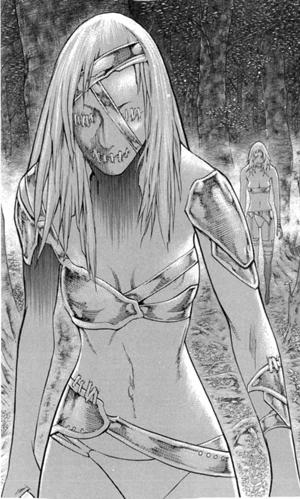 A grisly sister trope to Wipe That Smile Off Your Face, in which brute-force means instead of fantastic ones are used to seal a person's lips. Sometimes this trope is applied to living characters as a torturous way to prevent them from speaking or crying out. It's also used occasionally on corpses, often to send a message to whoever finds them that the dead victim had talked too much. Self-inflicted examples also occur, for added Squick.

Variants may use something other than string, such as wire, pins, or padlocks. Whatever the means of closure, the unfortunate subject of this trope is going to have pierced lips.

Subtrope of Facial Horror, and the inversion of Glasgow Grin. Sometimes combines with Eye Scream if multiple facial features are sealed.

Can result in a literal case of I Have No Mouth And I Must Scream, especially if accompanied by other horrors. Related to Bound and Gagged, particularly if the stitching process is shown.