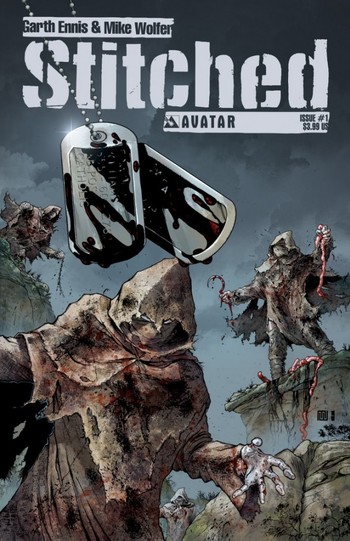 We have survived for centuries. We shall live forever. As long as your kind exist, we exist. We thrive on chaos, destruction. There is no sweeter reward than death. Even among ourselves, who are ancient and eternal... we feed on our eternal strife.
Advertisement:

A five-man team of American soldiers are on their way to evacuate a small squad of British troops from the mountains of Afghanistan. Their helicopter suffers an engine failure and crash-lands in the mountains, far from home and well out of radio contact with their home base. Two of the crew members die in the crash, and of the three survivors, one has suffered a potentially life-threatening wound to the leg.

They meet up with the survivors of the SAS squad they're there to rescue, but soon encounter an enemy that has it in for both them and the Taliban: the Stitched, undead creatures that tear any human they reach limb from limb, guided by mysterious men in black robes. With little ammunition, no food, no water, and a wounded companion, the soldiers must figure out a way to get out of Afghanistan before the Stitched or the Taliban find and kill them.

Stitched is both a horror comic book from Avatar Press and a seventeen-minute short horror film. In both cases, it's written by Garth Ennis; in the former, it has art by Mike Wolfer.

Ennis's run on the comic ends with issue #7, but Wolfer opted to continue it beyond that point as writer/artist. Wolfer's issues, rather than dealing directly with the plot of the initial arc, follows the path across the world of a surviving tank of the fluid that creates the Stitched, where it is often used as a biological weapon. It appears to have ended with issue #19.

There's a spin-off known as Stitched: Terror, set in Texas by Pat Shand and Daniel Gele where the Stitched are used as a terrorist weapon by an all-female group from the Middle East.

Tropes encountered in this work include: