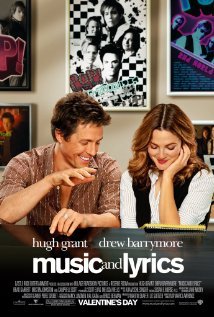 2007 Romantic Comedy, and Affectionate Parody of 1980s pop music and the stars related to it.

In The '80s, Alex Fletcher (Hugh Grant) was one of the biggest pop stars in the world, as a singer / song-writer for the hit band Wham 'PoP!'. Unfortunately, the Eighties ended, and so did Alex's career, pretty much; after his bandmate and collaborator betrayed the group by stealing their last songs and recording them solo, Alex's career dried up and he ended up a has-been, eventually finding some niche of contentment and income performing to crowds of his now middle-aged female fans at school reunions and theme parks.

Unfortunately for him, even this last well of employment (and dignity) seems to be drying up; there's new old acts embarking on reunion tours every day, and Alex is losing gigs. Possible salvation - and a return to the Good Old Days - beckons when Cora Corman (Haley Bennett), a Britney-style teenybopper star and fan of his music, commissions him to write a duet to be performed on her next album and concert tour. Unfortunately, Alex only wrote the music, not the lyrics; however, by an astonishing stroke of luck, his attractive-but-scatty plant-waterer, Sophie Fisher (Drew Barrymore), demonstrates an unexpected knack for writing song lyrics...

See if you can't guess how it progresses from there.