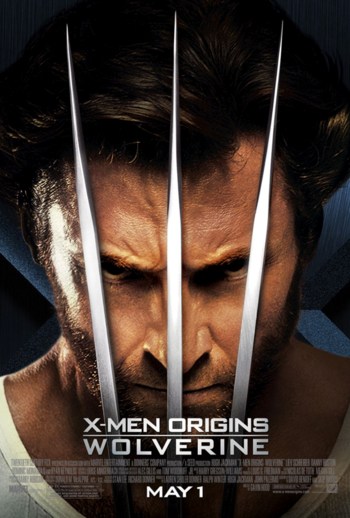 "Why is the moon so lonely?"
"I'm coming for blood; no law, no code of conduct. You put me in the right direction, you get the hell out of my way."
— James "Logan" Howlett / Wolverine
Advertisement:

X-Men Origins: Wolverine is a prequel to all prior entries in the X-Men Film Series; it focuses on Logan's Mysterious, Dark and Troubled Past from his childhood up until several years before he hooked up with Professor Xavier's gifted students.

On a cold Canadian night in 1845, James "Jimmy" Howlett sprouts claws made of bone and kills a man; he and his half-brother, Victor Creed, escape into the night together. Over the next century, Jimmy and Victor tear a bloody swathe through the American Civil War, both World Wars, and Vietnam—and during Vietnam, the Army has them both executed (Victor for killing a superior officer, Jimmy for defending Victor).

And that execution would have stuck if the half-brothers hadn't possessed the Healing Factor that gives them near-immortality. Since the execution merely "tickled" the duo, Colonel William Stryker exonerates them of their war crimes and recruits them into a squadron of mutant soldiers who perform morally reprehensible tasks for the American government. Jimmy leaves in disgust after one massacre of innocents too many, while Victor—who enjoys his job way too much—stays with Stryker.

Several years later, Jimmy—now calling himself Logan—is forced to deal with his past when Stryker tries to recruit him back into the team... and an enraged Victor later kills Logan's lover. Stryker reapproaches Logan and offers a deal: if he undergoes an operation to reinforce his skeleton with adamantium, he'll have a chance for his revenge against Victor. Logan survives the operation due to his healing factor, then escapes from Stryker's clutches before a planned memory wipe—and vows to kill both Stryker and Victor.

A follow-up to this film, The Wolverine, was released in 2013. Originally envisioned a sequel to this movie, it evolved into a sequel to X-Men: The Last Stand instead. This film was also the first of a planned Origins Spin-Off series that would've been followed by X-Men Origins: Magneto, which was scrapped and remade heavily into X-Men: First Class.

Thanks to his superhuman reflexes, Wade Wilson manages to slice an incoming bullet in half and kill two mooks behind him.

Thanks to his superhuman reflexes, Wade Wilson manages to slice an incoming bullet in half and kill two mooks behind him.