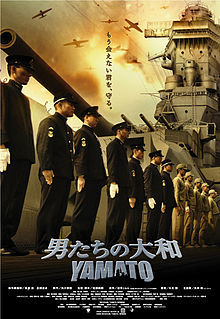 Yamato (男たちの大和, lit. "The Men's Yamato") is a 2005 Japanese World War II film. It was written and directed by Jun'ya Satô, based on a novel by Jun Henmi, and scored by Joe Hisaishi.
Advertisement:

April 6, 2005. A thirty-ish woman, Makiko Uchida, comes to the port of Kure, seeking a boat. She is looking for someone to take her out into the open ocean, to the spot where the Japanese battleship Yamato was sunk, with the loss of almost all its crew, sixty years before. An old fisherman, Katsumi Kamio, agrees to take her. He reveals that he is one of the very few survivors of the sinking. She in turn reveals that she's the daughter of Mamoru Uchida, another Yamato crewman, whom Kamio thought had gone down with the ship.

From that Framing Device the main story plays out. A teenaged Kamio joins the Navy in 1944 and is assigned to the battleship Yamato, pride of the Imperial Japanese Navy. He's subject to brutal IJN training by Petty Officers Uchida, Moriwaki, and Karaki. As Japan's military situation deteriorates, the Yamato is damaged in the October 1944 Battle of Leyte Gulf. Finally, with defeat looming, the Yamato is sent off on a desperate suicide mission, Operation Ten-Go