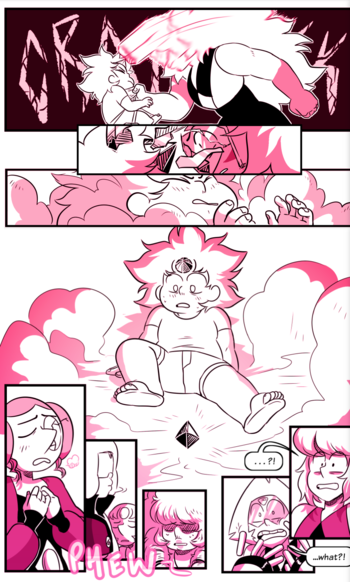 Usually, a failed attack simply means that the target gets away with little or no damage. This trope is when it not only wastes your chance to attack and possibly leaves you open for a Counter-Attack, but actively damages you. Whether the attack fails and backfires may be determined by your ability to execute Action Commands or do well enough in a Mini-Game, but it's often up to the Random Number God.

This trope is used to balance powerful attacks and make them riskier to use. If both a successful attack and a backfire are devastating enough, it's a Death-or-Glory Attack. On the other hand, downplayed Self-Damaging Attack Backfires may still deal significant damage — the important part is that their failure hurts the attacker at least a little.

Self-Damaging Attack Backfire can be confused with a few similar tropes. To qualify for this one, all of the following requirements must be met:

Sub-Trope of Critical Failure, which covers failed attacks in general. Can overlap with Deadly Dodging. Related to Attacking Through Yourself. Compare Hoist by His Own Petard, when the use of a weapon or plan not only backfires, but leads to the user's death or at least defeat. See also the Friendly Fire Index for tropes about those times your attacks accidentally (or "accidentally") hurt your allies instead of (or in addition to) yourself.