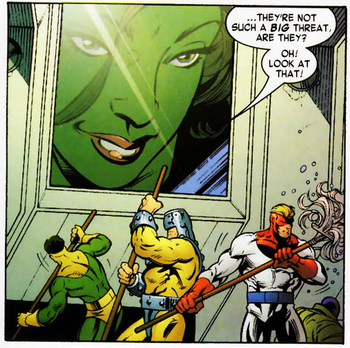 In most worlds where extranormal or paranormal powers exist, there are people who try to use them for personal gain, societal disruption or plain eeevil. These people should be isolated from society, but where exactly? A plain old Big House will be too easy to escape. A Tailor-Made Prison is the most reliable option, but it's overkill and too expensive to build one for every petty evil mage, dark space knight or dastardly super.

The solution? The golden mean, as usual. The Extranormal Prison is much more secure than any muggle prison, and it's specifically secure from extranormal powers of any inmates therein, almost always containing some sort of built-in Power Nullifier. It's large and versatile enough to contain many inmates with varying powers. Only the most important baddies will be too tough for this institution to contain, so they'll be put in a Tailor-Made Prison, or, if even this fails, sealed in a can.

However, The Empire can also acquire the know-how to build this sort of prison. In this case, they'll be used to contain heroic empowered individuals. However, Imperial extranormal prisons are characterized by shoddy construction and lax security, so they are still Cardboard Prisons for the heroes.

The Panopticon is a prison within the Oldest House used to contain Altered Items.

The Panopticon is a prison within the Oldest House used to contain Altered Items.