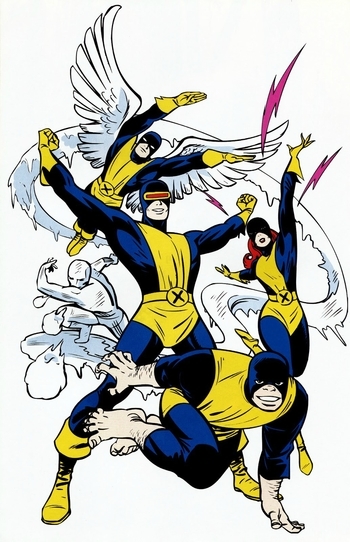 The original five X-Men.
"It's 1987. Do you know what your children are?"
Advertisement:

A long-running Marvel Comics franchise, starring mutants with superpowers. The good guy mutants — mainly the eponymous X-Men, led by Professor Xavier—use their powers to fight the bad mutants and protect normal humans — many of whom fear and hate them anyway. Features a lot of characters.

For the page describing the team itself, click here.

open/close all folders
The main titles in 2022 are:
Comic book titles linked to the X-Men include:

Advertisement:
Storylines and events involving the X-Men include:

...and too many more to name. Every major character has had at least one miniseries, usually several. See what

The Other Wiki has to say about it.