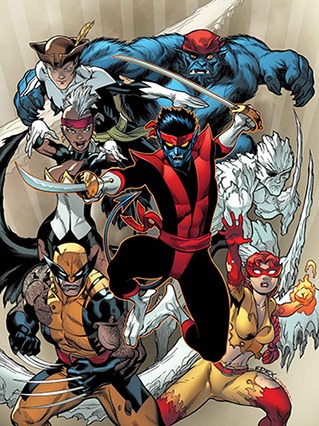 Does it get any more amazing that the X-Men fighting pirates in the middle of Hell?
Advertisement:

Ever thought that X-Men, the Marvel franchise with strange mutants with weird powers, complete with Fantastic Racism and Love Dodecahedrons, with of a touch of both Space Opera and Soap Opera could stand to be a little more epic?

Amazing X-Men, launched in 2013, is an X-Men series that focuses on grandiose, larger-than-life storylines with the teachers of the Jean Grey School. To touch on how big the series' storylines are, the opening arc brought a mutant into the X-Men family who has never been before, and brought old fan favorite Nightcrawler Back from the Dead from Heaven and the X-Men descended into Hell to fight Nightcrawler's father and he was in command of a pirate ship full of demons.

Amazing X-Men was first started by Jason Aaron in 2013, then after the first arc, Christoper Yost took over writing duties. The team is also notable for featuring Firestar as a first-time X-Man.

No relation to the The Amazing Spider-Man, though he does drop in to visit his amazing friends.