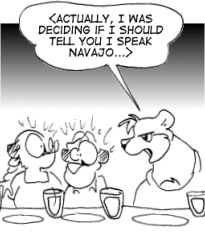 Huey: [in Chinese] I do not like being laughed at.
Chinese kickball player: Wait, did he just— [gets knocked out by the kickball]
— The Boondocks, "The Red Ball"

When two characters try Hiding Behind the Language Barrier, talking about someone else who is present in a language the third party supposedly doesn't speak, and the third party turns out to speak that language just fine, it's a Bilingual Backfire.

A two-person variant of this trope is often a form of power play, where Alice insults Bob in a language she assumes he doesn't know (thus attempting to put him off-balance and subordinate to her) — only for him to delivewor a fluid comeback in the language or in their common tongue (indicating that he at least understands, if not speaks the other one).

Related to Bilingual Bonus and (sometimes) Obfuscating Stupidity. A Completely Unnecessary Translator may be employed to take advantage of this. Multilingual readers will realize that this is Truth in Television. See also Right Behind Me, for when the speaker wrongly depends on distance rather than dialect to leave the target of their remarks in ignorance.

She then asks in general how many there understood English, only to have half the crowd raise their hands.

In short, if you assume someone visiting your country doesn't speak your language and you badmouth them, any consequences that arise are your own fault.

Chinese kickball players insulted one of their opponent, Huey Freeman, in Chinese. They quickly found out it was ill-advised.

Chinese kickball players insulted one of their opponent, Huey Freeman, in Chinese. They quickly found out it was ill-advised.