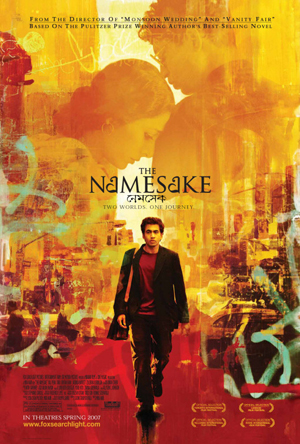 The Film of the Book with the same name by Jhumpa Lahiri, directed by Mira Nair. The film revolves around the cultural struggles faced by Gogol Ganguli, the son of Ashima and Ashoke, who are Indian immigrants to America.
Advertisement:

The story begins when Ashima (Tabu) and Ashoke Ganguli (Irrfan Khan) move from Calcutta, India to New York. They have a son, whom they temporarily name Gogol, after Nikolai Gogol, and a daughter, Sonia. Gogol (Kal Penn, yes that Kal Penn) eventually becomes his legal name, and it shapes much of the events of his life. Gogol eventually changes his name to Nikhil ("Nick" for short) and eventually falls in love with two women, both of whom reflect his attitudes toward himself and his culture.

Not to be confused with namesakes in general nor Namesake gags.