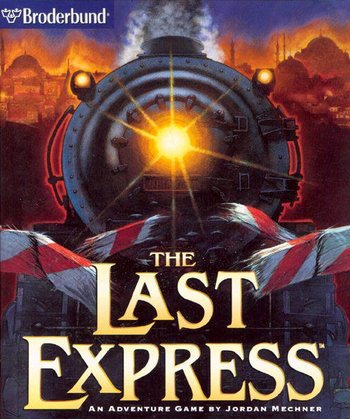 On July 24, 1914, The Orient Express sits in the Gare de l'Est, in Paris, bound for Constantinople. A worried American looks out the door of the train car as it begins to pull out of the station. With a look of disappointment, he returns to the car.
Advertisement:

As the train speeds through a French field, a motorcycle pulls alongside it in its travel. The passenger stands up on the motorcycle. Grasping at the rails, he makes a leap across to the door of the train, landing with a hard thud, adjusting his coat and casually stepping inside. You are Robert Cath, wanted all across Europe. You have just boarded the Last Express.

The Last Express was a 1997 Adventure Game by Smoking Car Productions, set on the Orient Express at the eve of World War I. Lovingly written and put together, it was the unfortunate victim of a Diabolus ex Machina involving its distributor. Brøderbund Software's entire marketing department quit just weeks before the game was to be released, which resulted in absolutely no advertising for it. While critically acclaimed, it was one of the biggest flops in gaming history. Thankfully, Interplay Entertainment obtained the rights to the game and started re-doing it.

One of the creators (Jordan Mechner) edited all the significant events together into a movie, which can be watched at his site

. The game itself has been rereleased as a Digital Download Collector's Edition

. It is also available on GOG.com

iOS, and Android. A screenplay for a proposed film adaptation is available to read here.

The Orient Express service between Paris and Istanbul was stopped by the outbreak of World War in July 1914.
It did not run again until May 1932.