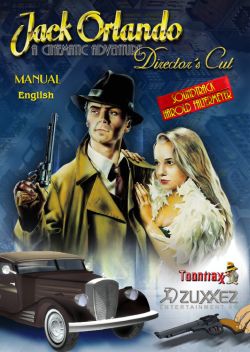 Jack Orlando is an Adventure Game published in 1997 (with a Director's Cut edition released in 2001). It was made by TopWare's development studio in Poland.
Advertisement:

The game is set in the 1930s, and follows an American private detective named Jack Orlando as he tries to foil a criminal conspiracy and prove his own innocence.