Film / The Taking of Pelham One Two Three 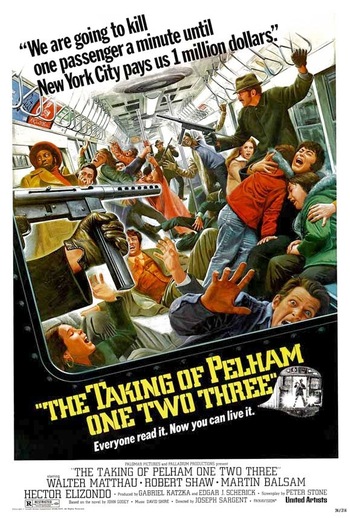 Thank you for choosing the New York Subway.
Garber: You won't believe it.
Rico: You know me, I'll believe anything.
Garber: The train's been hijacked.
Rico: I don't believe it.
Advertisement:

During an otherwise mundane day at the office, New York City Transit Police lieutenant Zachary Garber (Matthau) receives the shocking news that a gang of men have hijacked a subway train. The hijackers, led by "Mr. Blue" (Shaw), are demanding a $1 million ransom to be paid within one hour, otherwise they will begin killing the hostages. It becomes a Race Against Time for Garber to deliver the money and save the lives of the passengers whilst also trying to anticipate the hijackers' next move.

Remade in 1998 (starring Edward James Olmos and Vincent D'Onofrio), and 2009 (starring Denzel Washington and John Travolta). The 2009 version splits the Garber character into two persons (Denzel Washington as MTA Dispatcher Walter Garber, and John Turturro as NYPD Hostage Negotiator Detective Camonetti). Travolta co-stars as Ryder, the criminal mastermind and leader of the highly-armed gang of hijackers, including a subway-knowledgeable henchman, (played by Luis Guzman). Adding to the trouble, Ryder refuses to speak to Detective Camonetti, forcing Garber to negotiate with him on his own. As the tension mounts beneath his feet, Garber employs his vast knowledge of the subway system in a battle to outwit Ryder and save the hostages.

The 1974 film provides examples of:

The 2009 film provides examples of:

The 1998 film provides examples of:

Alternative Title(s): The Taking Of Pelham 123