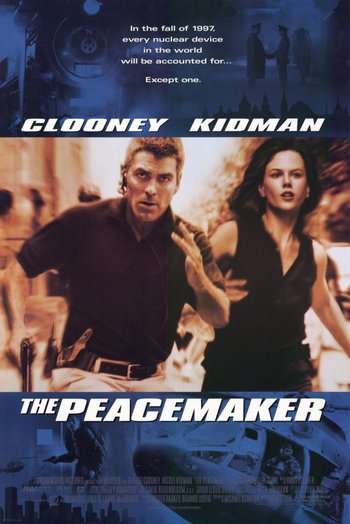 The Peacemaker is a movie from 1997 directed by Mimi Leder, staring Nicole Kidman and George Clooney. It was the first film released by DreamWorks.

A collision of Russian trains results in a nuclear explosion that turns out to be a cover for theft of other weapons. An official in the US State Department overseeing nuclear weapons, Dr. Julia Kelly (Kidman), and a U.S. Army Special Forces officer. Lt. Col. DeVoe (Clooney), must work together to find and recover the stolen nukes before they can be used. The movie was filmed in Slovakia and parts of the former Eastern Bloc as well as New York City. An example of the post-Cold War era in film making, it still retains a great deal of the Cold War focus on the Russian threat and American world supremacy.

Has nothing to do with the comic book character Peacemaker and his series.