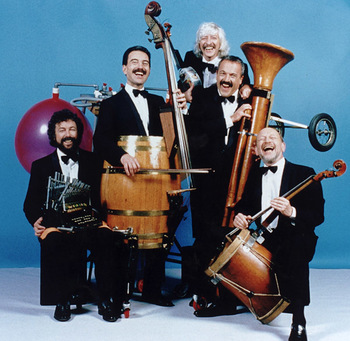 An Argentinian comedy-musical group that's internationally popular in Spanish-speaking countries. In Argentina it's equivalent to Monty Python for its absurd humor and quotability, as well as for being a troupe of overeducated silly men. No relation to Superman's arch-nemesis.

The closest thing to this in the USA is P.D.Q. Bach.

In case you were wondering, their name is not Spanish; luthier is a word loaned from French which means "one who makes stringed musical instruments (as violins or guitars)". As they make their own "informal" musical instruments, stringed ones in many cases, the name is appropiate.

That "etc" includes a wild range of "informal instruments" made by themselves, hence the name (a luthier is a maker of stringed instruments).

For those who don't speak Spanish: https://www.youtube.com/watch?v=u7syv95rwXE

For those who speak Spanish but haven't heard of them: https://www.youtube.com/watch?v=Ro3CTjCM6q0

One sketch that sums up their style, is in Spanish but the second part is quite visual; it is the music of the trailer of a film called The Mysterious Murderer: https://www.youtube.com/watch?v=yuTYdXF6_vk

A silent sketch about a silent movie: https://www.youtube.com/watch?v=WLW-oRP5M7U