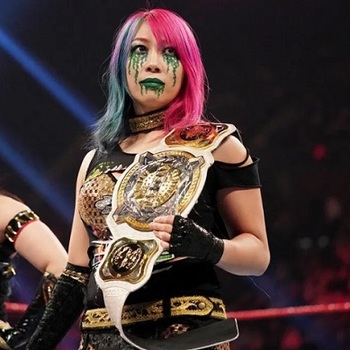 The Empress of Tomorrow.
"No one is ready for Asuka!"
Advertisement:

Originally working as a designer, Urai turned to wrestling when she was inspired by many of the great wrestlers of her time, including the likes of Keiji Mutoh, Akira Maeda and Minoru Suzuki amongst many others. After training with Yuki Ishikawa, she debuted for the all-female promotion AtoZ in June 2004 as Kana, spending nearly two years there before suddenly retiring in March 2006 due to chronic nephritis. A year and a half and a graphic design agency later, however, Kana returned to the ring as a freelancer, working for several joshi puroresu (Japanese women's pro wrestling) promotions as well as Pro Wrestling ZERO1. She eventually found a home with the Passion Red stable and NEO Japan Ladies Pro Wrestling promotion, winning her first professional wrestling title via the NEO Tag Team Championship which she and Nanae Takahashi held for two months in 2009, until she quit the stable at the start of 2010.

In April she held the first of several Kana Pro self-produced events, and by summer 2010 she began working regularly for SMASH, Yoshihiro Tajiri's follow-up replacement for Fighting Opera HUSTLE. She quickly developed an arrogant, power-hungry character in which she became the top heel first for SMASH, then for joshi puroresu in general, as well as the leader of a stable called Triple Tails in both SMASH and Pro Wrestling Wave, which she joined following the folding NEO at the end of the year. When SMASH folded in 2012 to be replaced by Wrestling New Classic, Kana signed a home promotion contract with WNC, ostensibly ending her days as a freelancer, though this didn't work out in practice — not only did she appear several times for Dramatic Dream Team in addition to her Wave commitments and Kana-Pro events, and she wound up quitting WNC at the end of the year due to late payment issues. During her time in these promotions she became the inaugural and first two-time SMASH Diva Champion, a two-time Wave Tag Team Championnote with Triple Tails teammates Ayumi Kurihara and Mio Shirai, and five-time DDT Ironman Heavymetalweight Champion

note a parody of the 24/7 championship concept, whose "champions" have included inanimate objects such as ladders, toy dolls, and even the title belt itself.

Aside from staying with Wave, Kana continued to find work through other joshi promotions such as JWP Joshi Puroresu, Ice Ribbon, and Reina Joshi Puroresu, as well as her own Kana-Pro and Triple Tails.S shows. She has also made rare appearances for Pro Wrestling NOAH and All Japan Pro Wrestling. She became was a one-time JWP Openweight Champion

, one-time Reina World Tag Team Champion with Arisa Nakajima, and one-time Reina World Women's Champion during this time. She has also frequently traveled abroad to the United States to compete for SHIMMER and CHIKARA, often chasing after the SHIMMER Tag Team Championship with LuFisto but never obtaining. In contrast to the majority of her Japanese work, much of her time in America was spent working as a face.

In July 2015, Kana revealed her plans to retire from professional wrestling and try new things after an upcoming Kana-Pro event in September. However, this would be misdirection, as she signed with WWE the following month, later taking on the ring name Asuka when she officially debuted on the NXT developmental brand. At NXT Takeover: Dallas, the first big show of 2016's WrestleMania weekend, she defeated Bayley for the NXT Women's Championship

. On NXT she became the longest reigning champion withing a single run in history.note Shayna Baszler surpassed her in total number of days in 2020 but divided between two reigns The next year would see Asuka move up to the Raw main roster, soon claiming two landmark victories as a Sole Survivor in a Survivor Series elimination match in 2017 and the first ever winner of the Women's Royal Rumble match in 2018. By the end of 2018, she captured the SmackDown women's title for the first time ever and defended it successfully for 100 days, a reign where she notably became the only person to cleanly defeat Becky Lynch in her "The Man" era (by making her tap out, no less).

After losing the SmackDown title, she moved to the Tag Team division with fellow Japanese wrestler Kairi Sane as the Kabuki Warriors. First debuting with Paige as their manager but later they got rid of her after turning heel. Eventually they managed to defeat Alexa Bliss and Nikki Cross to become the WWE Women's Tag Team Champions and elevate that title higher than any other wrestler had done before, going as far as to secure the main event spot of TLC 2019 in a TLC match against Becky and Charlotte Flair.

In 2020, she won the Women's Money in the Bank briefcase; the next night, it was revealed that inside the case was the Raw Women's Championship, because Becky vacated the title due to pregnancy. This made Asuka the second female WWE Grand Slam Champion and the first woman on the roster to win both the Royal Rumble and Money in the Bank briefcase. After this she went on to main event RAW for months as she feuded with the remaining three Horsewomen. At the end of the year, she won the tag team titles a second time while still holding the RAW Women Championship, making her the fourth-ever female double champion in history, and the first woman ever to win the tag team titles with different partners.

Becky Lynch, who never again thought of any opponent as being at her level after becoming The Man, admitted Asuka was the only wrestler she needed to fight out of personal desire. And that's not a light statement; Asuka is considered to be pretty much the Final Boss of the whole WWE women's division. Many wrestlers (from Ember Moon to Natalya to Charlotte Flair) have stated that working with Asuka was one of, if not the highest point of their careers. Her career even transcends any female division, with plenty of male wrestlers like Tajiri, Kenny Omega, Triple H, and Rusev calling her one of the greatest overall wrestlers of all time. Weekly Puroresu magazine has featured her in the cover plenty of times and famed journalist Dave Meltzer called her one of the best overall wrestlers in WWE today. Hell, she even got the respect of none other than Minoru Suzuki himself.

Not to be confused with musician Moon Kana.

"These tropes are the future":