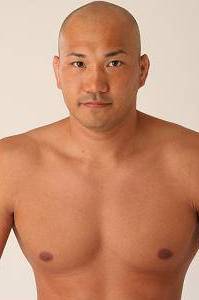 Masahito Kakihara (born April 29, 1972) is a Japanese former Professional Wrestler and Mixed Martial Arts trainer. He debuted in UWF Newborn as part of the shoot-style movement, and later became a bright rookie for the next incarnation, UWF International, under the teachings of Nobuhiko Takada. He had feuds and big matches against foreign members of the company, and was one of the few who got with his aura more or less unscathed out from the interpromotional matches with New Japan Pro-Wrestling, but was left free when UWF-i folded. He had then a short tenure in the similarly short-lived promotion Kingdom, but unlike his partners who turned towards PRIDE Fighting Championships, he stayed in pro wrestling and joined All Japan Pro Wrestling. After some alliances with Mitsuharu Misawa and fellow shooter Mitsuya Nagai, Kakihara left for NJPW and became part of his junior heavyweight division, winning the Best of Super Juniors 2003. He competed for the company until he retired in 2006 due to a neck injury. However, he would make a return to wrestling from 2011 onwards for Satoru Sayama's Real Japan Pro Wrestling as "Miyama☆Kamen", a gimmick he had used before.