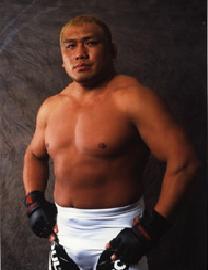 The man with the iron skull.
"Wanderlei eventually got to his feet and stalked Fujita like a Japanese octopus in an all-female prison. He hit him as hard as you can hit someone, many times. And every time Fujita fell down, Silva kicked him in the head as if he was going for a 70-yard field goal. None of this did anything!"
—Seanbaby on a certain article about Fujita.

"That guy can take a baseball bat to the side of the head!"
—Eddie Bravo after witnessing Fujita's toughness.
Advertisement:

Kazuyuki Fujita (b. 1970) is a Japanese Professional Wrestler and Mixed Martial Arts fighter, best known for his work in New Japan Pro-Wrestling and PRIDE Fighting Championships. He was originally a decorated amateur wrestler who missed the Olympics for one point, later turning to pro wrestling in NJPW. Starting traditionally as a jobber, he was busy climbing his way to low-card when he volunteered to take part in the blossoming MMA, a field which Antonio Inoki was endorsing among the New Japan wrestlers, but unlike most of them, Fujita was succesful and became the spearhead of the Inoki fighters. By beating names like Mark Kerr, Ken Shamrock and Gilbert Yvel through pure toughness and a barely not preternatural measure of Hard Head, he turned into one of the main Japanese players in PRIDE and once came as close as anyone to beat the invincible Fedor Emelianenko. After PRIDE's fall, he fought briefly for Sengoku and returned to Inoki in his company Inoki Genome Federation, where he currently wrestled for a time, before going to NOAH, where he currently resides, and had one of his most incredible matches.

As said above in the quoting, Seanbaby has a less serious recap of his more known MMA fights.

"The Last Tropes of the Inoki-ism":