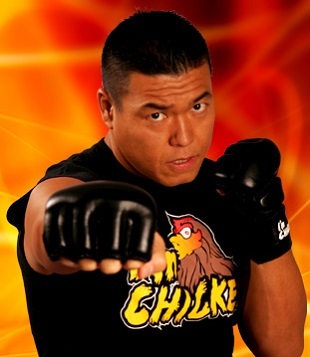 Naoya Ogawa (b. 1968) is a Japanese Judoka, professional wrestler and Mixed Martial Arts fighter. He first started as a judo competitor in high school, moving to the Meiji University and eventually becoming the youngest All Japan champion ever when he was just a student. His career would become just more successful, winning four world championships again as the youngest champion ever, six more All Japan Championships and a silver medal in Barcelona 92, becoming one of the few judokas who have won the heavyweight and absolute in the same championship and the second greatest All Japan recordman ever only behind the legendary Yasuhiro Yamashita. In 1997, he left the sport and joined professional wrestling under the wing of Antonio Inoki as part of his UFO movement. Ogawa debuted in New Japan Pro-Wrestling defeating established star Shinya Hashimoto, and went to dominate the promotion, having a violent feud with Hashimoto, winning the NWA World Heavyweight Title belt and attracting the crowd's ire with his arrogance and push. After eventually beating Shinya to his retirement from NJPW, Ogawa also left and surprisingly joined his rival's Pro Wrestling ZERO-ONE, in which he became a mainstay fan favorite and teamed with Hashimoto to become half of the NWA Intercontinental Tag Team Title holders. Ogawa also main starred in Fighting Opera HUSTLE, where he led the heroic HUSTLE Army against the evil Generalissimo Takada. In 2007, two years after Hashimoto’s demise, Ogawa left the promotion and returned to Inoki in his Inoki Genome Federation, having a handful of matches for them before retiring. He works now as a judo trainer and the coach of his son Yusei.