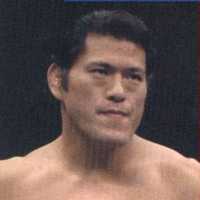 "When your fist connects with my chin, take care that your fist is not damaged."
— Antonio Inoki, answering to a joke made by Muhammad Ali
Advertisement:

Muhammad Hussain Inoki (born Kanji Inoki, February 20, 1943) is a Japanese Professional Wrestler and Mixed Martial Arts promoter, considered the most iconic figure in puroresu and the first MMA pioneer. Inoki debuted for Rikidozan's Japan Wrestling Association and became a big star along Giant Baba, until he was fired when planning a takeover. He then founded New Japan Pro-Wrestling, which went to be the biggest wrestling promotion thanks to his charisma and star. Trained by Karl Gotch in the ways of the catch wrestling, Inoki created the Strong-Style, the martial arts-oriented realistic wrestling style which distinguished his company for years, and staged a series of "Different Style Fights" against martial artists to prove its superiority. While most of them were worked, Inoki fought a real one against Muhammad Ali which ended with Ali's legs destroyednote There have been conflicting reports as to whether this bout was meant to be a worked fight or a shoot. Ali was under the impression that it was the former, with Inoki assuming it was the latter. Last minute clarifications turned it into an actual contest, but since one was a boxer and the other a wrestler, the rules were unclear. The most common story was that Inoki would be prohibited from any shooting style takedowns or tackles and could not kick from a standing position, though he could with one knee or arm on the mat (though some sources say that there were no such restrictions, while none other than Bret Hart, who worked for Inoki's New Japan promotion at the time, stated that Ali's camp had threatened Inoki if he tried to legit hurt Ali in the ring). Whatever the reason, when the fight started Inoki settled on the Boring, but Practical strategy of turtling, crab-walking across the ring and sending kicks at Ali's shins and knees while giving Ali nothing to punch at. This went on for 15 rounds of non-action, but Inoki's kicks left Ali's legs with several swelling and blood clots and would affect his mobility for the rest of his life.

After the MMA boom in The '90s, Inoki became even more interested in real fighting and turned NJPW into his personal test field, which made the company suffer and ultimately got Inoki out of it. He went on to form Inoki Genome Federation, where he kept his philosophy of mixing MMA and professional wrestling. Currently, Inoki remains as the top MMA promoter in Japan and one of its greatest legends.