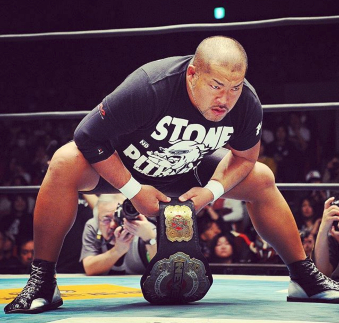 Tomohiro Ishii (born December 10, 1975 in Kawasaki, Kanagawa, Japan) is a professional wrestler currently and best known for working in New Japan Pro-Wrestling, though he has also wrestled in other promotions in the past.

He started his career in 1996 with Genichiro Tenryu's Wrestle Association "R", staying with them for four years and winning the International Junior Heavyweight Tag Team Championship

twice with Yuji Yasuraoka, before WAR went out of business. He then became a freelancer for several years, eventually finding himself as the apprentice of Riki Choshu in Riki's Fighting World of Japan promotion, eventually becoming the company's chairman, as well as making appearances for Pro Wrestling ZERO1-MAX.

In 2004 he started making sporadic appearances for New Japan, but would only become a regular there in 2006 when he formed the "Heisei no Gokudo Combi" tag team with Toru Yano. Ishii and Yano later became part of the faction Great Bash Heel, who occasionally appeared with Apache Pro-Wrestling Army in addition to New Japan. Ishii remained a lower-ranking member of the G.B.H. faction until April 2009, when Yano led the entire group save Tomoaki Honma into turning on leader Togi Makabe to join Shinsuke Nakamura in newly formed CHAOS following the imposion of Nakamura's previous faction RISE.

Continuing on in CHAOS with much the same role as he had in G.B.H., Ishii found himself involved in eight-man tag team matches at two consecutive Wrestle Kingdom events before entering a rivalry with the fourth generation real-life Tiger Mask, even becoming the sixth generation Black Tiger in the process. He began to climb the ranks in the company over the next few years, becoming a challenger for various championships and even gaining a cult following in the wake of highly acclaimed matches against the likes of CHAOS ally Masato Tanaka and Katsuyori Shibata. Throughout this time he also aided CHAOS in its later wars against other Power Stables in New Japan such as Minoru Suzuki's Suzuki-gun and Prince Devitt's Bullet Club, with he and his stablemates becoming tweeners and eventually full-fledged faces as a result.

, winning the championship from Tetsuya Naito on February 11, 2014 at The New Beginning in Osaka. He went on to hold this championship four times over the next two years, with two of said reigns ending in defeat at Wrestle Kingdom. However, this was not the end of his championship success: in fact, he became a beneficiary of New Japan's working relationships with other promotions such as Ring of Honor and Revolution Pro Wrestling, boasting reigns with the ROH World Television