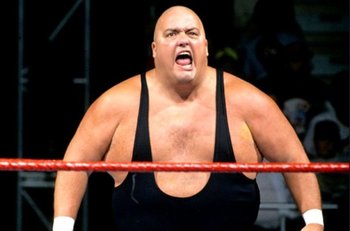 "No, no, no, FIVE FIVE FIVE!"
—King Kong Bundy
Advertisement:

Christopher Pallies (November 7, 1957 – March 4, 2019) was a American professional wrestler, actor and stand-up comedian from Atlantic City, New Jersey best known for his work in the 1980s as King Kong Bundy. He started his career in WWE in 1981 as a Jobber under the name Chris Canyonnote No connection to a later wrestler with a similar name. He then went to World Class where he changed his name to Big Daddy Bundy. He started using the King Kong Bundy name in Dallas in 1982, though he was also known in the AWA as Boom Boom Bundy. He also competed in Memphis and Georgia. He made his PPV debut at, appropriately, the first wrestling PPV, WrestleMania on March 31, 1985, where he had his legendary squash of SD "Special Delivery" Jones. In his last WWE PPV match, at WrestleMania XI in 1995, he was The Undertaker's fourth victim. He has also competed for various National Wrestling Alliance territories, Juggalo Championship Wrestling and many independent promotions. Among his in-ring achievements, he was a 1x Southern (Memphis) Heavyweight Champion

Despite the page quote, he has no connection to 555.

"These tropes have taken the five count from the great Bundy.":