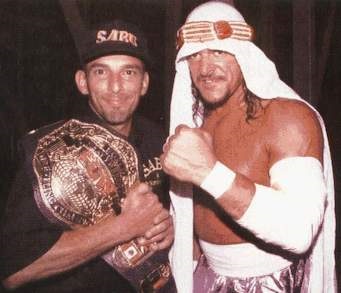 with manager Bill Alfonso
We have met the most animalistic wrestler in the history of this sport. We have met Sabu.
— Paul E. Dangerously, NWA Bloodfest 1993
Advertisement:

Terry Michael Brunk (born December 12, 1964) is an American Professional Wrestler known as Sabu. He is the nephew of the legendary Sheik. He debuted in the 1980s in the Detroit independent scene, later following his uncle to the Japanese hardcore wrestling promotion FMW. This was where, as a result of competing in no-rope barbed-wire matches, he became the "scarred-up freak" the world would come to know and love. He debuted in NWA Eastern Championship Wrestling on October 1, 1993, and defeated NWA ECW Heavyweight Champion

"The Franchise" Shane Douglas for the title the next night. He made his PPV debut at WCW Halloween Havoc 95, October 29, 1995, defeating Mr. JL (Jerry Lynn in a mask) Among his many achievements, he is a former 2x NWA ECW Heavyweight Champion/ECW World Heavyweight Champion

Not to be confused with either of those two other guys named "Sabu."note His name is a Shout-Out to the actor, though.