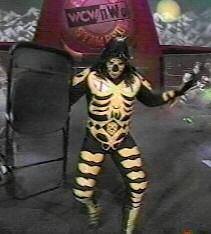 The Chairman of WCW

Adolfo Margarito Tapia Ibarra (born November 14, 1965) is a Mexican Professional Wrestler best known as La Parka. He started his career in the 1980s and worked under the names El Gringo and El Minero until he lost the El Minero mask. He changed to El Asesino de Tepito until he lost that mask. Then he tried Principe Island, until he lost that mask. He joined AAA when it was starting up in 1992, and the promoter Antonio Peña came up with the idea for the La Parka gimmick, which stuck. He mainly competed for AAA with a quick side trip in 1995 to ECW. He made his PPV debut at AAA When Worlds Collide in a Trios match teaming with Jerry Estrada and Blue Panther in a loss to 2 Cold Scorpio, Tito Santana and Pegasus Kid (Chris Benoit). He arrived in WCW in late 1996, debuting on the November 18, 1996 WCW Monday Nitro with a win over fellow luchador Juventud Guerrera. While he never won a title in WCW, he was very popular due to how exciting and entertaining he was. He left WCW in 2000. He was forced to change his name to L.A. Park because Peña had introduced a second La Parka and, after the regular La Parka signed with AAA's rival CMLL, Peña filed an injunction preventing him from being billed as La Parka in Mexico. He also made some unsuccessful appearances for TNA and a variety of independent promotions in the U.S. and Mexico. In 2010, he returned to AAA, though he left three years later. Among his in-ring achievements, he is a former IWC (Mexico) World Heavyweight Champion