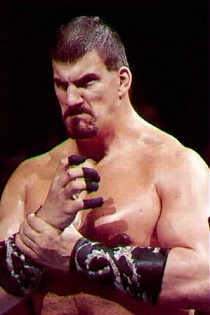 Robert Maillet (born October 26, 1969 in Georgetown, Ontario) is a retired Canadian Professional Wrestler and actor best known for his time in WWE from 1997 to 1999 as Kurrgan.

He started his career in 1989 as The Acadian Giant in the Atlantic Grand Prix Wrestling promotion in the Maritimes, and also competed for the hardcore W*ING promotion in Japan as Goliath El Gigante. He entered WWE in 1997 as The Interrogator as a member of the tag team the Truth Commission, whose gimmick was of a paramilitary organization from South Africa. He redebuted under the Kurrgan name on the December 8, 1997 Raw and was a member of The Oddities along with Giant Silva, Golga, Luna Vachon, Sable, the Insane Clown Posse and "George The Animal" Steele. He has also competed for the CMLL and UWA promotions in Mexico, in South Korea and for various independent promotions around Canada. Among his achievements, he is a former 3x USWA World Tag Team Champion

His acting roles include: the Über-Immortal in 300, Dredger in Sherlock Holmes (2009), Alexis Kaidanovsky in Pacific Rim, The Master in The Strain, Sluggo in Deadpool 2, Apex in Becky and the "Big Man" in Jupiter's Legacy.