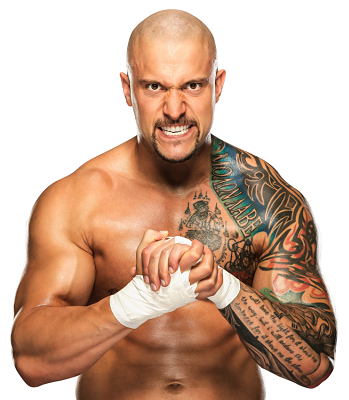 Kevin Kesar (born July 19, 1985 in New York City) is an American professional wrestler most known by the ring name Killer Kross, an edgier derivative of his initial moniker of Kevin Kross.
Advertisement:

He debuted in Season 4 of Lucha Underground as The White Rabbit, the leader of the Rabbit Tribe.

He was signed by WWE in 2020 under yet the subtle-yet-still-edgy derivative ring name of Karrion Kross, where he dominated NXT, eventually becoming NXT Champion. He was called up to RAW in 2021, where the atrocious booking he was subjected to became one of the most heavily-criticised moves WWE had made for a long time, before he was summarily released on the 4th of November 2021 in the latest round of mass talent cuts.