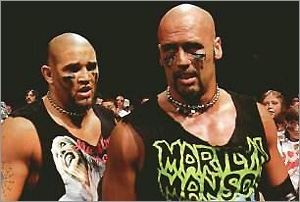 Mosh (Chaz Warrington) and Thrasher (Glenn Ruth) were an American Professional Wrestling Tag Team from New Jersey as The Headbangers. They trained together under "Pretty Boy" Larry Sharpe and started together as The Spiders. While working for SMW, promoter Jim Cornette gave them the Headbangers gimmick, inspired by having seen Marilyn Manson. They wrestled for years in the independents before arriving in WWE in late 1996. They would have a brief run with the WWE World Tag Team Titles

in 1997 before being Demoted to Extra.

Along with their WWE Tag Title run, they were also the inaugural HWA (Heartland Wrestling Association in Ohio) Tag Team Champions

and Thrasher won and lost the WWE Hardcore Title

during the Hardcore Battle Royal at WrestleMania XVI.