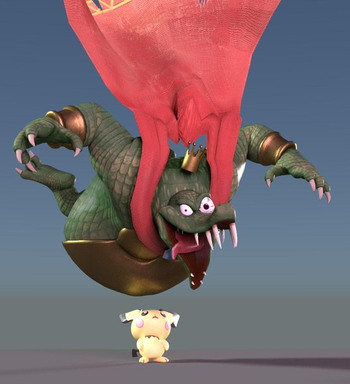 .
"Allow me to make amends by... what? BLOATING TO GARGANTUAN SIZE AND SQUASHING YOU LIKE THE INSIGNIFICANT BUG THAT YOU ARE!"
— Sir Raleigh, Sly Cooper and the Thievius Raccoonus
Advertisement:

A big or fat character launches themself into the air. On the way down, they use their mass as a weapon, landing on a smaller character who gets Squashed Flat against the big character's stomach. This may be preceded by a Shadow of Impending Doom before the big character falls. If they have both the strength and the corpulence to perform this, they are probably Acrofatic.

Popularized by Professional Wrestling, where this is most commonly known as a "splash". For a Bouncing Battler, this may be a favorite move.