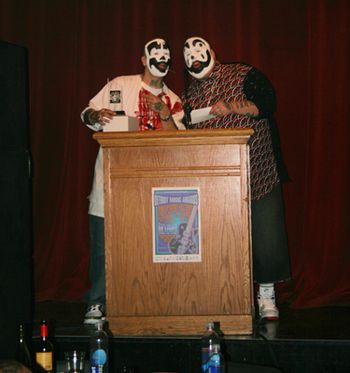 Consisting primarily of two people, Violent J (Joseph Bruce) and Shaggy 2 Dope (Joseph Utsler), the Insane Clown Posse are a Hip-Hop group and Professional Wrestling tag team from Detroit, and the co-founders of the independent record label, Psychopathic Records. Their music is generally placed in the "Horrorcore" category, and is focused heavily around Circus of Fear elements. They are also extremely loyal and honest with their fans, something to be admired. Many of their fans are like Dave Matthews Band or Grateful Dead fans in the sense that they'll listen to other kinds of music, but their favorite group has really captured their heart. ICP fans prefer to be called Juggalos.

ICP originated as a Gangsta Rap group called "Inner City Posse," derived both from the name of a Detroit gang (formed by Bruce) and a dream Bruce had involving a clown running around in Delray, the most depressed and blighted area of Detroit (currently slated to be largely demolished to make way for a bridge to Canada). The group's popularity resulted in them becoming the target of growing violence, leading its members to abandon gang life and adopt a Geto Boys-esque style instead.

ICP built a media and distribution empire all on their own. They were independent music before anyone else. They didn't want or need radio or MTV (back when either of those mattered) and they were an affront to the gatekeepers who owned every single aspect of the music industry. The Great Milenko was #8 on the charts and not a single video or song was played on MTV/Clear Channel. The Amazing Jeckel Brothers debuted at #4 on the Billboard Top 100, with guest appearances by Snoop Dogg (back when he was relevant) and Ol' Dirty Bastard (RIP). This was at a time when everything in the Top 10 was Ricky Martin, Britney Spears, or boy bands. There was—and still is—a lot of resentment toward them since they basically invented a new way rap empires could be built. And they did it out of necessity because no one else would invest in the music.

ICP have also been the subject of a number of parodies, including a music video parody on Saturday Night Live. Their albums The Amazing Jeckel Brothers, Bang! Pow! Boom!, and The Mighty Death Pop! have all peaked at #4 on the Billboard 200.

Insane Clown Posse are the Trope Namers for:

"We will never die alone, Juggalos will carry on, swing our tropes if we must, each and every one of us"