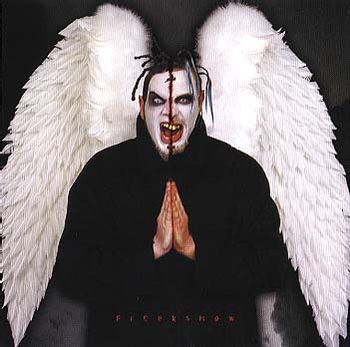 Twiztid was once referred to as the "proteges" of Insane Clown Posse. In actuality, Twiztid's members, Jamie Madrox and Monoxide, were originally from another Detroit Horrorcore/Acid Rap group, House of Krazees (the duo was once known as "Mr. Bones" and "Hektic"), and have been around since the same time as ICP. In recent years, Twiztid has come out of ICP's shadow somewhat and established themselves as a major act in Detroit hip hop, even gaining a few fans from ICP's Hatedom.

Twiztid's subject matter usually revolves around the duo's varied interests, including horror movies (both), comics, toys (both, but Jamie Madrox heavily), marijuana (both) and cigarettes (Monoxide).

2012 saw Twiztid leaving their position as hosts of Ashtrays & Action Figures, a show on Psychopathic Radio, and eventually departing from Psychopathic Records altogether after the release of their Abominationz album.

They formed the new label Majik Ninja Entertainment, which former Psychopathic artists Blaze Ya Dead Homie, Boondox and Axe Murder Boyz signed with. The signing of AMB led to a falling out between ICP and Twiztid, due to a personal dispute with one of the members of AMB and Violent J from ICP.

This group and its works are related to the following tropes: