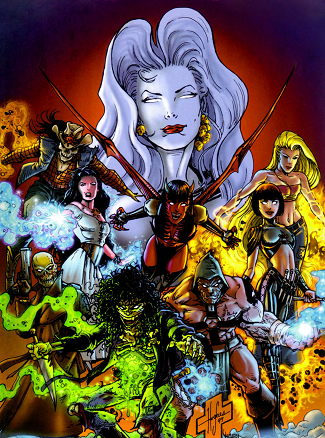 Chaos! Comics was a comic book publisher that operated from 1994 until 2002. Founded by Brian Pulido, it originally began as a vehicle for Evil Ernie, his idea for a movie turned comic book about an undead teenage serial killer who spearheads a Zombie Apocalypse while goaded on by a supernatural being called Lady Death, but it expanded into its own shared universe with multiple characters and titles. A company that specialized in ultraviolent horror, gorn, and dark fantasy with mostly Villain Protagonist and Anti-Hero characters, Chaos! is still generally remembered as kicking off the "Bad Girls" fad of '90s comics and being a prime example of the excesses of The Dark Age of Comic Books - not that these are necessarily bad things.

Chaos had licensing deals to handle WWF characters and the Halloween franchise and a pretty sizable fan community - affectionately called Chaos Fiends - that were arguably one of the earliest comics fan communities to really make use of the Internet. Sadly, they were a casualty of the crash of the industry in the late '90s/early '00s.

One or two of its franchises do occasionally still see print after being auctioned off to other companies. Lady Death, who quickly eclipsed Evil Ernie in popularity, is currently in series published by Boundless Comics. There have been various attempts to revive the company's other flagship characters, the most successful of these so far being the use of Evil Ernie as an Anti-Villain in Hack/Slash.

In 2014, Chaos! was revived and rebooted by Dynamite Comics through a titular miniseries starring Evil Ernie and another miniseries, simply titled Chaos!, by Tim Seeley, which serves to reintroduce the core Chaos! characters - except Lady Death, who is replaced by Lady Hel.