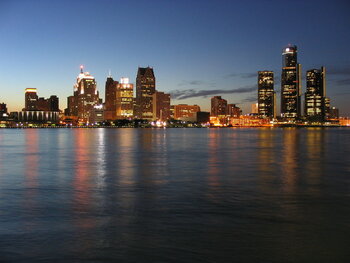 "It's not the end of the world, but you can see it
from here."
"When you hurt, we hurt
Your streets witness our struggle
Your bricks show are our rage through the emptiness of each house shuttered, of each factory closed
We've lived through the ups and the downs
But we remain, Detroit
We can never turn our backs on you Detroit, because we are you"
— Eminem, "Letter to Detroit"
Advertisement:

The Motor City. Motown. The D. Hockeytown. The Arsenal of Democracy. The Paris of the Midwest.

In the mid-20th century, Detroit was the fifth-largest city in the United States, the center of its powerful auto industry, and a bustling hub of music and culture. Things have changed a lot since then; Detroit is now the 27th largest city in the country.note Though much of that has to do with the flight of many former Detroiters to its sprawling suburbs; the overall metro area is the 14th biggest. But it still remains the largest city in the State of Michigan and the focal point of the Great Lakes State's main population center (with a metropolitan population of 4.3 million, or slightly less than half the total state population of 10 million) and economic engine.

The Detroit area is the center of America's automotive industry. Ford, General Motors, and Stellantis North America (better known as Chrysler) have headquarters there and it is known as the "Motor City" for this very reason.note Ford and Chrysler's headquarters are actually located in nearby Dearborn and Auburn Hills, respectively, and while General Motors maintains a large plant and its corporate headquarters within the city, its main research and development campus is in neighboring Warren. Its most recognizable structure is the Renaissance Center, a cluster of late-'70s-era skyscrapers that serve as GM's headquarters. The Center notably clashes with the rest of the city's skyline, built much earlier in the century; at the time it was built, it stood as a promise for a bright future for the city, and it now serves as a visible reminder of the region's stagnation.

It is geographically notable for a few reasons. Despite being separated from Windsor, Ontario by the Detroit River and Lake St. Clair, it features the busiest U.S.-Canada border crossing—the Ambassador Bridge. It is also the only place in the contiguous 48 States where Canada is south of the U.S., since Windsor juts out to the west just so.note As a result, a "city boy born and raised in South Detroit" is actually a native Canadian. Detroit itself is surrounded by smaller independent municipalities, which form the Metro Detroit area. With both a Spanish Univision station in Detroitnote said station now serves as an affiliate of religious broadcaster Daystar and (until it was shut down in 2012) a CBC tower in Windsor rebroadcasting the main Francophone feed from Montréal, it was for many years the only area in North America where you could watch free-to-air TV in three languages.note Providence, Rhode Island now has English, Spanish, and Portuguese stations, and Los Angeles has English, Spanish and Japanese language stations.

The Metro Detroit area is home to a myriad cultures and ethnicities, including one of the largest Arab populations in North America, centered in Dearborn (with a sizable Lebanese outpost in West Bloomfield — where they get along rather interestingly with the large Jewish population - and the world's biggest Iraqi Catholic population outside Iraq, centered in the northeast exurbs of Utica and Shelby Township, where they get along rather interestingly with the existing predominance of Albanians and Macedonians). It is also very economically and racially-segregated, with poorer minorities living in the city, the white working-class in the eastern suburbs and the Downriver areanote Allen Park, Brownstown Township, Ecorse, Flat Rock, Gibraltar, Grosse Ile Township, Huron Township, Lincoln Park, Melvindale, River Rouge, Riverview, Rockwood, Romulus, Southgate, Taylor, Trenton, Woodhaven, and Wyandotte next door to the city to the southwest, and the predominantly white, Indian American, and Asian American upper-middle-class in the northwestern suburbs/exurbs and the Grosse Pointesnote City, Park, Farms, Woods, Shores, and Harper Woods just east of the city proper. The Metro Detroit area is one of the most racially segregated in the nation.

This inequality is just one reason that Detroit has one of the least-flattering public images of any major city in the country. The decline of the American auto industry in the The '70s, combined with simmering racial, economic, and labor tensions, have made it the poster child for, and butt of many jokes about, urban decay and inner-city squalor for much of America. Detroit has lost 65% of its peak population since 1950 (from 1.8 million to less than 640,000). For decades, mentions of Detroit in the national media and pop culture have typically referred to it as a Place Worse Than Death, and the crumbling ruins of some of its more destitute neighborhoods have honestly been described as looking post-apocalyptic. This tends to seriously annoy Detroiters, who feel that the city's bad reputation is making it harder to revitalize. They also feel that many of the jokes are tired, clichéd, and lazy. The city filed for bankruptcy in 2013, becoming the largest municipal bankruptcy case in U.S. history. Since the bankruptcy, the city's finances are much more stable, and there are a number of projects for growth across the city (especially in Downtown and Midtown). That being said, city redevelopment can be a slow process, as the experiences of many other cities in the U.S. can tell. In recent years, however, the city has seen a number of new major retail openings to compete with those party storesnote a local term for a convenience store that sells alcohol, Amocos-turned-BPs, Perry Drugs-turned-Rite Aids and Arbor Drugs-turned-CVS Pharmacies.

Detroit is also known as "Hockeytown" due to the Detroit Red Wings, one of the "Original Six" teams of the NHL, and one of four such teams in the Eastern Conference's Atlantic Division,note even though Detroit is very far from the Atlantic Ocean - having moved there in 2013 after over three decades as one of the few Eastern Time Zone teams in the Western Conference, thus allowing the Red Wings to play more road games in their own time zone and a perennial Stanley Cup contender. The city has teams in all four major sports, as the Pistons had a few dominant runs in basketball and the the Tigers have had their moments in baseball. The Lions, on the other hand, have the second longest championship drought of any football team, having not won an NFL title since before the Super Bowl even existed.

The two primary sides, the East Side and the West Side, are divided by Woodward Avenue, a major thoroughfare designated as Michigan state highway M-1, although there are several lesser-known sides within these two larger sides. Woodward Avenue features a streetcar line called the QLine, opened in 2017, which connects downtown, midtown and New Center, where one of its stops is located across from the city's Amtrak station. Woodward is one of six wide, major throughfares that radiate from the city center into the surrounding suburbs (Woodward extends as far north as Pontiac in neighboring Oakland County), and in some instances, well into outstate Michigan.note the other five roads are Jefferson Avenue, which extends south to rural Monroe County and north to New Baltimore at the top of Lake Saint Clair (although it carries the names of Biddle Avenue in Wyandotte, Lake Shore Drive in some of the Grosse Pointes, and U.S. Turnpike Road in Monroe County); Fort Street (M-85), which extends through Downriver to the Monroe County line; Michigan Avenue (United States highway 12); Grand River Avenue (M-5), which extends all the way out almost to Grand Rapids; and Gratiot Avenue (M-3), which extends to Port Huron at the bottom of the Thumb.

open/close all folders
Downtown and Midtown
Downtown Detroit: The central hub of the city, serving as both a business district and a residential district. Many of Detroit's prominent skyscrapers are located in this area.

Fell into a Dork Age during The '70s as its status as the metro area's main employment center was displaced by new office centers in the suburbs, and was really showing by The '90s when Woodward Avenue through the heart of downtown was lined with wig shops, check-cashing places, and other Wretched Hive mainstays.

Downtown would escape from this Dork Age at the Turn of the Millennium, beginning with the Tigers' relocation to Comerica Park, and by the time of Quicken Loans' relocation of its headquarters from Livonia to Campus Martius in 2010 and the subsequent reoccupation of Downtown's formerly-abandoned skyscrapers, this Dork Age had ended.

Downtown is encircled by a one-way elevated light rail track called the People Mover, which has seen varying ridership levels since its 1987 opening, but is really useful for somewhat quick (and loud!) travel to various downtown hotspots for those who prefer not to walk (which is typically faster anyway), connects to the aforementioned QLine at two locations, and it gets especially packed during sporting events and conventions.

Midtown Detroit: Located across Interstate 75note originally built as the Fisher Freeway from downtown, Midtown covers about two square miles of the city, and features a collection of hospitals named the Detroit Medical Center.

New Center and the North End
New Center: Located next door to the northern edge of midtown, this commercial and residential district is centered on the intersection of Woodward Avenue and Grand Boulevard and anchored by the Cadillac Placenote General Motor's headquarters before they moved to the Renaissance Center and Fisher Building skyscrapers.

East Side
East Side: One of the earliest upper-class areas of the city (even if they were few and far between), but it also contained a great number of rundown areas in the past. Nontheless, east siders enjoy the best access to the Detroit River and Lake Saint Clair, and it is not uncommon to hear blaring horns from passing freighters on foggy days. The east side's street grid is all over the place, with streets suddenly changing directions in areas where grid directions clash with one another. On top of that, they tend to carry funky and French names, such as Saint Jean, Kercheval Avenue, Charlevoix, and Cadieux Road.
West Side
West Side: The section of Detroit that contains most of the city's upper-class neighborhoods, although the area was once working class. Streets tend to adhere to the cardinal directionsnote albeit off by two degrees due to surveying errors in the early 19th century and the Public Land Survey System. Much of the city's universities have also been set up on the west side, and it shows in the income levels.

That said, the west side also has a few off-the-beaten-path neighborhoods of its own, historically especially along Rosa Parks Boulevard, which was renamed in honor of the prominent Civil Rights Movement leader (who, in fact, resided in Detroit for her later life) in 1976 after its previous name, 12th Street, had become more well known for being the center location of the five-day 1967 riots, which wrecked the city's public image for a generation.

Southwest Side
Southwest Side: Historically working class due to the large amount of local factories, it's still being kept together north of the I-75 freeway, thanks in major part to Mexican-American immigrants.
Films set in Detroit or its nearby communities: