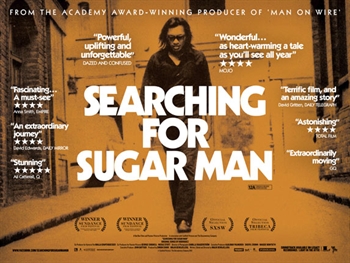 Searching for Sugar Man is a documentary that won the 2012 Academy Award for Best Documentary Feature. It follows Sixto Rodriguez (more commonly known as simply Rodriguez), a Detroit Folk Rock Singer-Songwriter who was so good that he got a record contract while he was only a small time pub singer.

However, the two albums he recorded went nowhere, Rodriguez's contract was dropped, and it seemed his career was over. Unbeknownst to him, his albums became underground mega-hits on equal foot with Bob Dylan and Elvis Presley in South Africa, where his soulful songs struck a powerful chord there during The Apartheid Era.

Long rumored to be dead by suicide, some South African fans decided to search out the facts about Rodriguez's fate and finally tracked down his producers. Upon learning to their astonishment that their idol was alive and well in Detroit, they finally got Rodriguez to contact them and a concert was arranged in South Africa. What followed was a comeback that was more awesome than anyone anticipated.