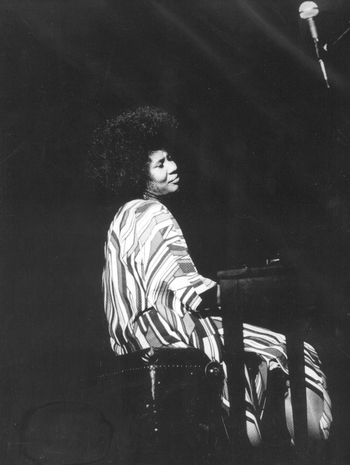 Turiya at the keys
"The music is within your heart, your soul, your spirit, and this is all I did when I sat at piano. I just go within."

Alice Coltrane was quite the jazz pianist and harpist. Her calm and meditative piano playing and dreamy rippling harp playing wouldn't really receive attention outside of her husband, John Coltrane's band, until he died. Leading her to continue to forward her own musical and spiritual vision, as she then started to release records as a composer and bandleader (recording under names such as Turiyasangitananda or Turiya Alice Coltrane). Albums like Journey in Satchidananda, Universal Consciousness, and World Galaxy, show a progression from a four-piece lineup to a more orchestral approach, with lusher string arrangements and are generally considered to be in the same vein as Trane's late work.

Up until 1973, she released music with Impulse! Records, the jazz label for which her husband recorded almost all of his later albums. She would later transition onto the Warner Bros. label, where she would release cassettes of spiritual Vedic chanting to the instrumental backing of synthesisers, most of which would be only given to members of her ashram. Until they were re-released by Luaka Bop in their World Spirituality Classics series. She would later go on hiatus in 1995, returning to music in 2004 after renewed interest in work had led to the compilation Astral Meditations being released.

Unfortunately, her comeback would be short-lived as she died in 2007 of respiratory failure on what would have been John's 80th birthday on September 23. Despite this, her influence is felt in artists as diverse as Kamasi Washington, Maisha and Flying Lotus (who coincidently, is her grand nephew).