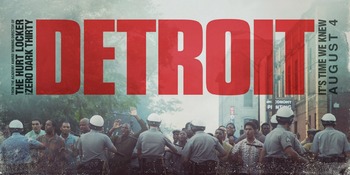 "I need you to survive the night."
Detroit is a docudrama and the third collaboration between director Kathryn Bigelow and writer Mark Boal. It stars John Boyega, Will Poulter and Anthony Mackie.
Advertisement:

In the summer of 1967, rioting and civil unrest starts to tear apart the city of Detroit. Two days later, a report of gunshots at police prompts the Detroit Police Department, the Michigan State Police and the Michigan Army National Guard to search and seize an annex of the nearby Algiers Motel, searching for the shooter and the gun.

Things go From Bad to Worse in a very big hurry, as the entire annex ends up hostages to rogue cops. Who will survive the night?