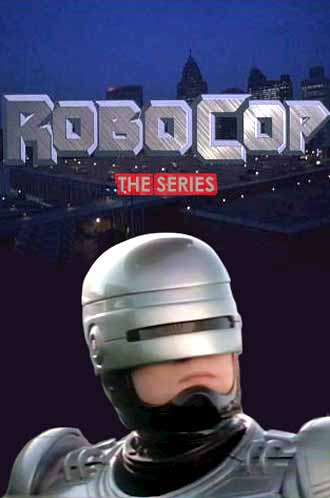 RoboCop: The Series is a 1994 live-action series based on the 1987 film by Paul Verhoeven, and starring Richard Eden as the titular cyborg.

The show takes place in an Alternate Continuity (ignoring the events of RoboCop 3), where Delta City (the project OCP is trying to complete in the films) is completed. Robocop/Alex Murphy (Eden) is working for the Metro South police precinct (in the first 3 films Robocop/Alex Murphy was working for the Metro west police precinct), along with his partner, Lisa Madigan, and a new set of supporting characters, including precinct head Sgt. Stan Parks, technician Charlie Lippencott and an adopted orphan named Gadget. The pilot episode (which uses an early script for RoboCop 2 as its basis) sees Robo running into several new enemies who would make appearances throughout the series, including "Pudface" Morgan, Dr. Cray Z. Mallardo and Corrupt Corporate Executive Chip Chayken.

Several other characters were seen in the series, including Murphy's wife Nancy and son Jimmy, as well as Diana Powers, an OCP executive's secretary who is murdered and has her brain installed into OCP's new Metronet computer system, thus allowing Murphy to access systems he wouldn't otherwise be able to get into.

21 episodes were made in total, with the pilot being a feature-length episode. The series is notable for featuring a more family-friendly storyline and toned-down violence — Robo would go out of his way to use non-lethal alternatives to capture criminals. More jarringly, OCP is now merely incompetent and naive; the Old Man of the film series being replaced by the greedy, but otherwise decent, Chairman. (Though some characters do still call him "old man," such as Dr. Mallardo in the premiere movie.)

RoboCop: The Series provides examples of the following tropes: