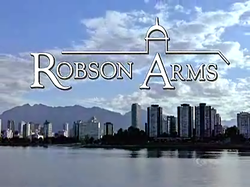 Robson Arms (2005-2008) is a Canadian dramedy that aired for three seasons on CTV. The series is structured as an anthology with recurring characters, as the network thought this would appeal to a wider audience than a straight anthology. Each episode focuses on one or a small handful of residents of the titular apartment building, particularly their sex lives and other wacky hijinks.