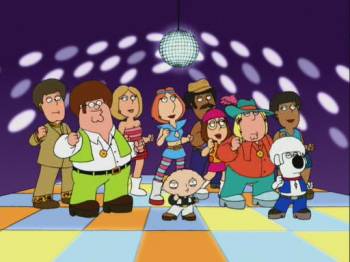 Get down, get funky, yeah!
"Disco is not dead! Disco is LIFE!"
— Tony P, Mystery Men

A disco-inspired sequence in an otherwise unrelated work.

May be the doing of a Disco Dan, but such a character isn't even necessary to bring some Disco interlude out of nowhere.

Of course, this doesn't count if the show is set in The '70s, or has Disco renewal as its main subject (like the 2008 French movie titled, guess what, Disco

). This trope is for gratuitous Disco moments with little justification (in-story)... besides the Rule of Cool.

May be used for a Dance Party Ending. Most extreme cases can be Big Lipped Alligator Moments, or a full-fledged Disney Acid Sequence.

Stacy gets down with Phineas, Ferb and the gang on the final hole of their miniature golf course.

Stacy gets down with Phineas, Ferb and the gang on the final hole of their miniature golf course.