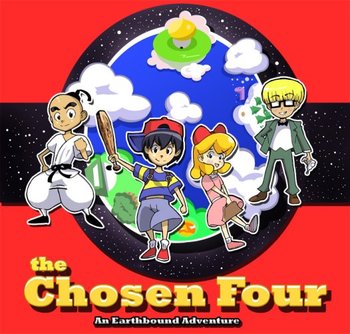 "If a man yells loud enough, he can do anything!"
Advertisement:

Straight from the mouth of a bee with big eyebrows comes a tale of courage, friendship, and the kind of silliness that will have you rolling on the floor! Will Giygas prevail or will the world's last hope band together and strike this intergalactic foe down? It all rests...upon the Chosen Four!

The Chosen Four is a fancomic based on the Nintendo video game EarthBound. It is posted at Starmen.net

by Darrow and is currently over 900 pages. The comic can be found and read here

or on Darrow's DeviantArt page here

where the comic is originally posted by the author is quite entertaining in its own right.