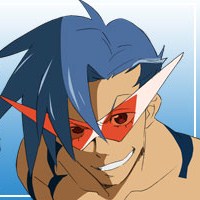 The difference between you and him? He makes this look good!
Advertisement:

These are the absolute coolest variety of Cool Shades. Rather than those frightfully dull elliptical, circular, or square lenses, the lenses in these shades are in the shape of scalene triangles, joined at one point and with the shortest sides resting on the bridge of the nose. They are often, but not always, worn by lowlife hoodlum characters. There's even an emoticon for them: ◥▶◀◤﻿

A variation is for robots to have their actual eyes in this shape. This serves no purpose other than looking cool.