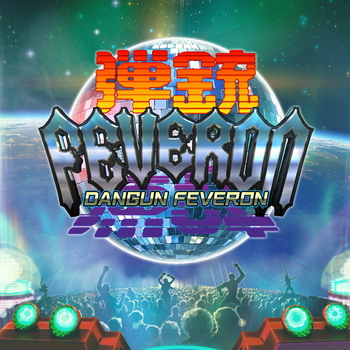 Heaven is here inside my soul!
As the overtly hostile General of Space attacked, before him stood a young man with an afro hair style and a glint in his eye.
The two of them could sense that destiny had brought them together as they sized each other up. However, this was merely the prelude to the gruesome battle they would soon face...
Advertisement:

Dangun Feveron (marketed in some countries as Fever SOS) is a 1998 Vertical Scrolling Shooter by Cave.

It is Space Year ○●◎○note yes, that's what it says in the manual. Admiral Gratze of the planet Melt was assigned to conquer the Earth, when he comes across an interesting little planet, Fever. Space pilots are highly discouraged from flying near Fever, as the planet is known for electromagnetic waves that can disrupt nearby spacecraft. Gratze, thinking that to be just a little superstition, decided to try to make a little pit stop on this planet, but sure enough, his flagship's sytems were disrupted, angering him when the damage disrupted a very steamy video call with his wife Aileen.

Enraged by this incident, Gratze now sets out to instead declare war on planet Fever, with three heroes, Afro, McCoy, and Stephanie standing up to him with their Cool Starshipsnote the Type-A, -B, and -C ships, respectively, all of them empowered by Dance Energy!

Dangun Feveron stands out not only for its esoteric plot that doesn't care to take itself seriously, but for its unique gameplay mechanics, even compared to other CAVE games. The player is given the option to customize their loadout, with one of three different ships of varying shot width, special attacks that are performed by holding down the fire button, and the speed of their ship, which is fixed at all times (unlike, say, DoDonPachi where you can slow your ship's speed). Enemy bullet patterns are sparser than other CAVE games, but in exchange are faster, requiring the player to rely less on precision dodging and more on reflexes. Instead of trying to perform hit combos, the player is instead tasked with collecting cyborgs that fall out of enemy ships to raise their Score Multiplier, and letting any cyborgs escape off the top of the screen resets the multiplier, forcing the player to carefully balance safety with preserving their multiplier. All of this, to a wonderfully groovy disco soundtrack by Ryuichi Yabuki and Nanpei Misawa.

A PlayStation 4 port and an Xbox One by M2 were released as part of the M2 ShotTriggers series of ports in 2017 in Japan and 2018 in North America. This revision features a variety of widgets that show real-time gameplay information, two new arrange soundtracks alongside a remastered version of the original, and a new Arrange Mode.