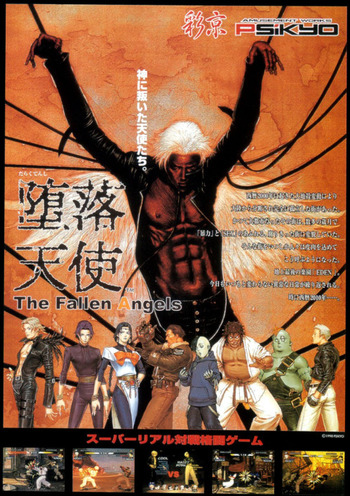 Where angels go to die.
"The earthquake that struck the city at 7:13 A.M. on February 10, 2000, measured 7 on the richter scale.
The veneer of peace that had been maintained in the city's streets by total information control suddenly vanished, and the computer-controlled concrete jungle stopped functioning.
A major shift in the Earth's crust had severed the city from its surrounding landform, leaving it an island with virtually no outside contact. Money-crazed inhabitants soon lashed out for the city's remaining but useless vestiges of power, preaching salvation while hiding their wicked motives.
Advertisement:
Sex, crime and drugs ruled the streets, as the city began to decay. Ironically, they called the wretched remains of their city "Eden- the last paradise."
It is now a decade later. The year is 2010."

Daraku Tenshi: The Fallen Angels is a 1998 2D Fighting Game developed by The Steel Hearts development team and published by Psikyo. It is their second attempt in the 2D versus fighting genre after Battle K-Road.

This game is known for mainly two things. One, that it was developed by ex- SNK designers. And two, for being incomplete when it was released despite some pretty ambitious plans for the time. Notably, the presence of four character sprites that never got fleshed out as full parts of the roster.

Rumor has it that the devs went back to SNK after the game's rushed release. This is supported by how many of the characters (both finished and unfinished) have striking resemblances to fighters that later appeared in The King of Fighters series and Garou: Mark of the Wolves.

Yatagarasu, also made by the same development team, is seen as a Spiritual Successor.

To get more info about this game, you can see the article

in The Other Wiki, as well in its own wiki

. Also, these archived pages with info and galleries (in Japanese

) thanks to Wayback Machine.

In 2019, it was reported that Zerodiv will attempt to finish the game after two decades