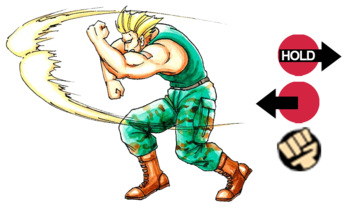 A mechanic most prevalent in the Fighting Game genre. Charge inputs require the player to hold a movement stick in the opposite direction their character's facing, roughly around a second (though this can vary depending on the game) before quickly moving the stick forward with a button press to activate their special. They're generally a more complex command than the standard quarter-circle inputs (as the name implies, moving a controller stick in a quarter-circle motion), but reward the player with a higher-payoff ability.

How a charge input might tie into a character's overall playstyle.

Charge inputs are common for moves with lots of area coverage like long-reaching projectiles, anti-air attacks, or high-mobility Dash Attacks. The Trope Codifier, Guile from Street Fighter, exemplifies this with a with his far-reaching "Sonic Boom" projectile and the jumping "Flash Kick" that covers the space above him. Other payoffs to these moves include higher damage, priority, and locking opponents in place with high stun. Expect to see them from lots of zoners and neutral-orientednote Neutral: The state of a match where each side is trying to gain an advantage over the other fighters.

Another thing to note is that in most 2D fighting games, the block mechanic is tied to holding the movement stick backwards, which further reinforces the defensive nature of charge inputs by allowing the player to be in a constant state of reactive defense. This also applies to crouching, which both shrinks the player's hurtbox and blocks low attacks.

Charge inputs aren't very common outside of a 2D space due to the added complexity of moving a stick in more dimensions, though the overlying principle of patient play can still apply.

A Sub-Trope of Charged Attack.

Can overlap with Kamehame Hadoken, Shoryuken.